Burlon Craig was an American folk potter from the Catawba River Valley in North Carolina, Craig was the last potter in the Catawba, and is credited with reviving an industry that was almost dead in the region. Catawba pottery used alkaline glazes that were made either from ground cinders (a glassy bi-product of iron smelting), or ground glass from bottles, the cinders created an earthy brown glaze, the bottles a dark green.   He had no higher education, and learned the trade through apprenticeships. He is best known for his face jugs, though he did not begin to make them until later in his career. Catawba face jugs trace their roots to folk art from the Germans who settled the region.

His work is a good example of how folk art, though often looked down on, is often equal to or better than work created in academic settings in concept, quality, and function.  When looking at his work one is reminded that you don't have to be educated in order to make good, sound, work, and that many of the best often never finished college. 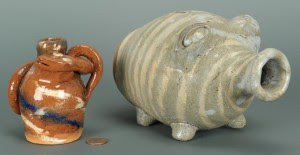