Roxanne Jackson take a different approach to creating her art compared to what most people think to do. Rather than sitting down and brainstorming several ideas and ultimately picking the "best one," she just goes with what comes to her naturally, which can be tough for some. She explains that art has many roles and depicting and creating beautiful objects is not the only role art has. Therefore, Roxanne creates a lot of objects that represent the deceased. For example, she is currently working on a dead white unicorn (crystal formation for the horn) and a life-size bull made out of cement that is also dead. Roxanne states that she gets the majority of her inspiration from the National Geographic magazine, so strongly influenced by theories related to evolution.


The picture posted below is entitled Cadaver Stirrup 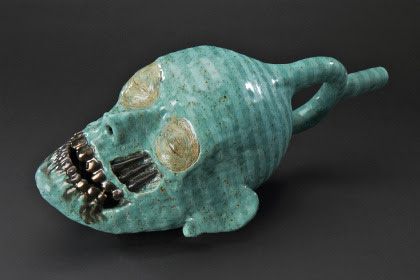